The Surre(gion)alist Manifesto And Other Writings

Max Cafard became legendary when “The Surre(gion)alist Manifesto” first appeared in Exquisite Corpse in 1990. The question “Who is Max Cafard?” is still being asked with some regularity at our offices. Max Cafard became one of the “surregions” of his own generative imagination when his insurgent writing gave our readers the sudden frisson that they were in the presence of something new. One never forgets that frisson when first encountering Nietzsche, Cioran, Derrida, or Deleuze. Imagine the lucky contemporaries of those thinkers who were first on the scene when that writing appeared! The frisson is renewed by each encounter, but the original feeling of the discovery is unequalled. This was precisely my epiphany on encountering Max Cafard’s manifesto: I am in a new place.

What kind of place this is will be debated and delved into with all the voluptuousness attendant on every reader’s discovery. What I know is that the best philosophers create an appetite and by the size of their appetite you shall know them. The hunger Max Cafard’s writing creates is enormous, a hunger made bigger by a tradition that thrives on appetite and discovery from the Dao onwards. Max Cafard has “roots” in recognizable traditions, anarchism and surrealism among them, but these are floating, walking roots that can show up unexpectedly in the most remote (or familiar) regions. The rhizomatic attention of Cafard’s roots is doubled by their insouciance.

Welcome to Cafardia, a region that works both by approfondir (deepening) and by espacialisation (wing-spreading). This is globalite against globalisation, globulity against globalism, providentialism against provincialism. 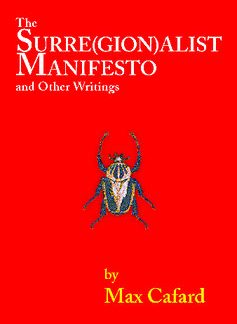 You're viewing: The Surre(gion)alist Manifesto And Other Writings $10.00
Add to cart