The Feast on Titanhead is a system-agnostic module for use with any traditional roleplaying game. “The year is uncertain. The place, the frozen edges of Europe.

Amid a cluster of high and snow-covered peaks that make up the Dorag passage, the curiosity of a scientific expedition has caused a great portion of the mountainside to crumble away, revealing the hidden remains of a gigantic skull of unknown origins. Older than the mountains themselves, this antediluvian remnant is a glimpse into a long dead past. Succumbing to the pull of knowledge and the promise of fame amongst European academies, the expedition ventured in.

Alas, they found nothing, but horror and despair.”

Doomscribe delivers a heavy-metal, grind-core interpretation of the Manifestus Omnivorous, coated in weird-horror. One that speaks both to Lovecraft fans and those of movies like Saw. There is a big bad MONSTER that players will most likely not defeat. The LOCATION is the head of that very monster. And everything seems to be there to DEVOUR something. Includes psychotic outbreaks, naked people popping their eyes out, grotesque masses of fungi and engines of growth/rebirth that reshape humans into abnormal masses of skin and soft-tissue. 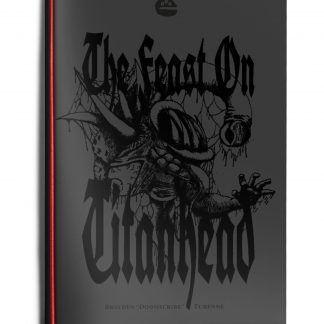 You're viewing: The Feast on Titanhead $15.00
Add to cart